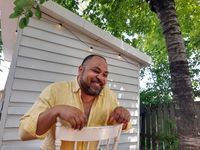 Marcus Walker Live Under The Canopy

Marcus Walker has played across Toronto, Canada, Europe, and throughout the Caribbean. He is beloved in the Toronto music scene, bringing a bright warmth with him to every show. His originals are rooted in the language of the 70s & 80s, giving his originals a reminiscent first listen.

He has recorded multiple albums with Toronto bands including Alabaster Tushi, The Brothers Deluxe, Adam's Rib, as well as releasing material under his own name. He is a regular collaborator with Drummer/Producer Tony Rabalao (Joy Drop, Sade), and also produces his own material. He has played the TD Jazz Festival, The "Live From The Hub" outdoor music series, Kenzington Markets Pedestrian Sundays, The Roncy Rocks Music Festival, & has run some of the most popular open stages in Toronto. Marcus hasn't slowed down through out the pandemic either, and can be seen playing several times a week throughout Toronto. He is currently putting the final touches on his next studio album “Fare Well”.